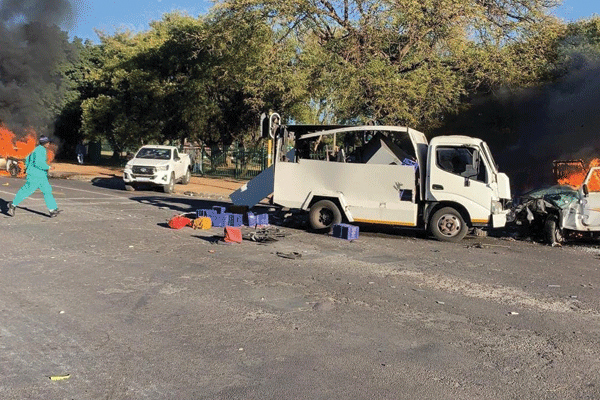 CIT robbery suspect in the dock

Rustenburg – The long arm of the law has finally caught up with one of the suspects who allegedly blew up an armoured vehicle before making away with an undisclosed amount of money in July 2019.

Mlindeni Ndlovu, who is believed to be one of the masterminds behind the cash-in-transit (CIT) heist, appeared before the Rustenburg Magistrates’ Court on Monday 14 September on a charge of CIT robbery. At the time of going to print, the 31-year-old Ndlovu was up for his second court appearance and is expected to apply for bail. Ndlovu’s arrest, during a multi-pronged police operation spearheaded by the Hawks, led to a breakthrough in numerous CIT robberies that are currently being investigated.

Eyewitnesses to the 2019 CIT told Platinum Weekly that the suspects staged an accident at the corner of Fatima Bhayat and Bosch Streets by ramming a white Mahindra bakkie into the armoured truck. “They also blocked the car that was escorting the armoured truck. They then bombed the armoured vehicle,” the eyewitness said. “They fled the scene with a grey Toyota Hilux and a Ford Ranger. However, they did not manage to take all the cash,” the eyewitness added.

Video recordings of the incident, as well as other evidence obtained from the scene, assisted the Hawks to track down and arrest Ndlovu, fourteen months after the CIT heist.

His trial and ongoing police investigations are likely to shed more light on the whereabouts of the other suspects involved in the heist. The Hawks are eager to establish more leads on the other CIT heists that were carried out by criminal syndicates in and around Rustenburg during 2019.