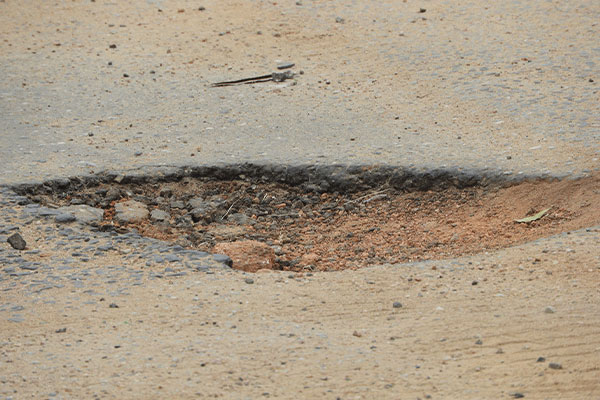 Rustenburg – The Rustenburg Local Municipality (RLM) said a significant increase in the number of vehicles travelling in and around the city over the past few years has increased the costs associated with the maintenance of road infrastructure.

Potholes and huge cracks on many roads leading into the central business district (CBD) have become a major concern for vehicle owners, taxi operators and other road users.

Platinum Weekly has previously reported on how the slow pace of the municipality in rehabilitating damaged roads is now resulting in some residents and civil rights organisations using their own resources to carry out repairs.

Intermittent rains have also been making it difficult for those at the forefront of repairing the roads to execute their duties unhindered - which have caused the potholes and cracks on busy roads to widen.
In response to questions posed regarding the deterioration of the roads, RLM spokesperson David Magae explained how increasing economic activities within Rustenburg played a huge part.
“Our roads are being used by many heavy vehicles and this has increased over the years because of the heightened economic activities related mostly to the mining sector. The heavy vehicles are damaging the roads,” he said.

“When it is raining, we cannot carry out any maintenance work on the roads because of the wet surfaces,” he added.

The Road Traffic Act, 1996 (Act No. 93 of 1996), and the Road Traffic regulations made in terms of this act determine the maximum mass limits of vehicles used on public roads.

Although heavy vehicles such as haulage trucks are not allowed to travel on small roads in suburbs such as Tlhabane, Rustenburg Noord, Protea Park and others, it is sometimes unavoidable especially when facilities such as shopping malls are being constructed.

Magae explained that apart from its equitable share from the national government, the municipality relies heavily on its revenue collection to operate optimally and provide key services such as the maintenance of roads.

According to Magae, the millions owed to the municipality in unpaid water and electricity bills are making it difficult for the city to fulfil its service delivery obligations.

In a move aimed at widening the city’s revenue collection base and enhancing service delivery, RLM municipal manager Victor Makona held meetings with representatives from various mining houses in February.